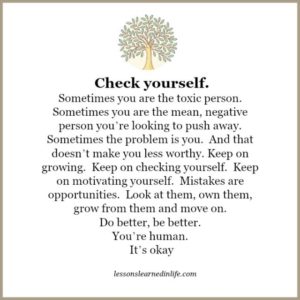 I love knowing that if I am willing to see where I have failed, hurt, or harmed, I get to learn from and transcend that.  I knew I had to file for divorce as my husband and I were arguing and he said to me, actually declared: “There is nothing wrong with me or the way I do things, I will never change.”  Certain that these were the truest most honest words he had ever spoken to me, I shuddered; wow–if I had to stay the same forever, I would kill myself, right now. Like plants, we are either growing or dying…but maybe for some, growing has more to do with size and power. I am here to learn, grow and change.  What else could be the point? I attributed that to me being effed up and him-not at all.  His emotional vacancy/composure had always confused me for emotional stoicism and maturity.  Either way, our marriage  was officially no longer a promising or safe space for either of us.  Me desperate for change and him committing  to NEVER.

If it is ever safe and prudent, I would love to share with him all of the ways I now see how I was unfair or unreasonable, even unkind.  But I was arrogant and broken mostly believing I too, needed to be right.  More than anything, I needed to be connected and have at least one shared truth between us, besides that “I was the problem and if I found the right tactics, level of horniness, reverence for him and his sisters, therapy, that we would be ok.”  With two little guys watching and learning about life and love from us, I could not abide.  Devastated, I filed for divorce the following day.  I could list countless unfair and damaging things he has said and done to me.  But it will get me no-where.  As I was raised, if you shared those things enough times with enough people, you could get people on your side and be right.  Oh yay.  and then….

In recovery, I learned to look at myself, my patterns, my beliefs, my reactions.  I learned to take responsibility for those things and to no longer assume or accept responsibility for the behaviors of others.  Recovery definitely results in sick relationships dying natural deaths.  When you check yourself and keep your side of the street clean and own your shit, there is nothing to fight about.  And when there is nothing to try to be right about, in these relationships,  it goes silent.  And that is hard AF.  Because unhealthy engagement, for so long, posed as connection.  But it was really entanglement and no longer would be counted for anything but a source of hopeless pain.  I have learned to surrender that entanglement, one day at a time, applying the tools and principles of my program.

Recovery connects me with others on a spiritual path, but also divides me from those too uncomfortable with with the constant and rigorous emotional honestly that is an essential term of engagement.  Emotional honesty: doing wholesome things for wholesome reasons with wholesome attitudes(or maybe even a knowingly unwholesome attitude before you are feeling it but doing it anyway since we can no longer let our feelings lead us).  Emotional honesty is transparency of purpose, full disclosure.  Not everybody is ready for that.  I became ready, only after I watched my marriage to a man, who was nearly identical morally and emotionally to my mother and sister, crumble.  The end became clear as I no longer was willing to fight,pretend, or soldier through sex.  Without those dynamics, there was nothing but resentment and division of labor between us.  This is not how my boys would learn about love, partnership, and marriage.

During our marriage, my husband’s sister’s were in and out of our lives.  This was difficult for him.  Because he submitted to them and I would beg him to stand up for himself or our family and then they would fall out after he expressed a boundary or discontent OR we would fight because he expected me to submit to them.  He has one sister they all pretend does not exist (when they are not discussing all the ways she got herself on the outside of their group).  With 3 aunts taking turns being in and out of their lives, there seemed no good reason to mention to our sons that they had another one here in NC.  Wanting to preserve their innocence and keep them from the reality of conditional love, was doable before divorce and our move East.  Now our sons have 2 conditionally loving aunts on dad’s side and one on mine.  And the one with the soul, whom we were close to while their father and been banished by the two others, is an unmentionable.  It is heartbreaking.  I hope our sons will know her again one day.  She and their dad were very close, growing up, but ultimately, she had less to give him in later years and so aligning with sisters who had more $$ to offer is what he chose.  He could never seem to have his two sisters and me close at the same time.  AND Never the other sister and the two sisters at the same time.  Triangulation is part of his tradition and programming.  I worry how our sons may unknowingly adopt triangulation as a way of managing.   I believe their father is the more evolved of them all.  But change is hard and he feels punished and inferior when he is not being overtly praised and rewarded by those vested with the powers to reward and punish.  I sense, he is at times, for moments, changing for our sons, probably not intentionally, but still.  He needs to be perceived as right, perfect, and in charge or favored.  That opposes every spiritual teaching and all that I value in my core.  I believe in equals and connection, maybe not possible in the world at large or in a  work place, but in chosen relationships, this is a core value.  Authenticity, expansion, unity–Spirit over ego.

I am in a program of recovery for those whose lives have been affected by someone else's drinking, drug use, mental illness. I am newly learning faith, hope, and courage, practices not witnessed by me, in my childhood, with my family. Sadly, No Contact, as a last resort, is how I keep safe from diminishing words and actions directed at me. I think I have listened for the last time to how I deserve mistreatment. By holding out for something more wholesome and loving, I have been both banished and demanded to return. I prefer serenity to proximity. I will continue with my program and faith in the best possible outcome, so long as I do my part-- to stalk GOD as if my life depends on it. View all posts by Magda Gee