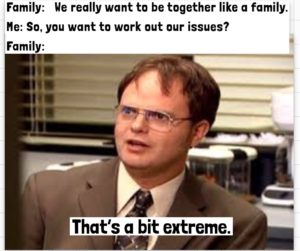 Highly relevant and illuminating passage from Braving the Wilderness by Brene Brown and brilliant supporting meme made with ♥ by yours truly :

THE PROLIFERATION OF BULLSHIT

The bullshitter ignores these demands altogether. He does not reject the authority of the truth, as the liar does, and oppose himself to it. He pays no attention to it at all. By virtue of this, bullshit is a greater enemy of the truth than lies are.

One of the biggest sources of bullshit today is the proliferation of “If you’re this then you’re automatically that” and “You’re either with us or you’re against us” politics. These are emotional lines that we hear invoked by everyone from elected officials and lobbyists to movie heroes and villains on a regular basis. They’re effective political moves; however, 95 percent of the time it’s an emotional and passionate rendering of bullshit.

Normally, we used forced choice and false dichotomies during times of significant emotional stress. Our intentions may not be to manipulate, but to force the point that we’re in a situation where neutrality is dangerous. I actually agree with this point. One of my live-by quotes is from Elie Wiesel. “We must always take sides. Neutrality helps the oppressor, never the victim. Silence encourages the tormentor, never the tormented.”

The problem is that these emotional pleas are often not based in facts, and they prey on our fears of not belonging or being seen as wrong or part of the problem. We need to question how the sides are defined. Are these really the only options? Is this the accurate framing for this debate or is this bullshit?

If alternatives exist outside of these forced choices (and they almost always do), then the statements are factually wrong. It’s turning an emotion-driven approach into weaponized belonging. And it always benefits the person throwing down the gauntlet and brandishing those forced, false choices.

The ability to think past either/or situations is the foundation of critical thinking, but still, it requires courage. Getting curious and asking questions happens outside our ideological bunkers. It feels easier and safer to pick a side. The argument is set up in a way that there’s only one real option. If we stay quiet we’re automatically demonized as “the other.”

The only true option is to refuse to accept the terms of the argument by challenging the framing of the debate. But make no mistake; this is opting for the wilderness. Why? Because the argument is set up to silence dissent and draw lines in the sand that squelch debate, discussion, and questions—the very processes that we know lead to effective problem solving.

Our silence, however, comes at a very high individual and collective cost. Individually, we pay with our integrity. Collectively, we pay with divisiveness, and even worse, we bypass effective problem solving. Answers that have the force of emotion behind them but are not based in fact rarely provide strategic and effective solutions to nuanced problems.

It’s also easier to stay civil when we’re combating lying than it is when we’re speaking truth to bullshit. When we’re bullshitting, we aren’t interested in the truth as a shared starting point. This makes arguing slippery, and it makes us more susceptible to mirroring the BS behavior, which is: The truth doesn’t matter, what I think matters.

It’s helpful to keep in mind Alberto Brandolini’s Bullshit Asymmetry Principle or what’s sometimes known as Brandolini’s law: “The amount of energy needed to refute bullshit is an order of magnitude bigger than to produce it.”

2 Replies to “Truth to Bullshit”